All You Need To Know About Slot Cars

Slot cars are miniature, scaled replicas of automobiles. They race on a special track that features slots or grooves. The word “slot” in the name of these mini-cars comes from those shallow grooves or channels of the track. These grooves hold the vehicles on the track as they negotiate turns and twists. as well as when they move along straight sections of the track.  Two metal rails line the grooves. The grooves themselves have narrow separations. The separations are placed into the track to form the slot. On the bottom of the slot car is a small blade that fits into the groove and secures the car to the track as it races.

If you like the idea of speed, but don’t want to your life in a real race car at potentially deadly speeds, then a slot car set is the way to go. You will get all the necessary components needed to construct the the race track right out of the box. Extra track pieces, controllers, car bodies, and other accessories are available for you to purchase separately.

Slots cars first became available in early 20th century. These tiny cars became almost immediately with children, teenagers and adults alike. Early track designs had a raised rail embedded into the track. Early stock car players were not able to control the speed of the vehicle. After some improvements, slot cars by the 1930s came equipped with small internal combustion engines. With further improvements, electrical slot cars appeared on the market.

By the 1950s manufacturers were working to improve the tracks by utilizing grooves. These grooves replaced the raised track. Current now flowed through the groove on the track, allowing racers to control the speed of each car on the track with a hand-held controller. These innovations made it possible for several individuals to enjoy racing slot cars on the same track at the same time.

These refinements and improvements saw the rise in popularity of slot car racing. More manufacturers produced slot car sets that could be enthusiasts could expand using add-on kits. By the 1960s, a wide variety of slot cars and tracks were on the market. Consequently, racers had more choice than ever with this variety.

If you would like to participate in competitive slot car racing, you should know that there are three common slot car scales or sizes. They include: 1:24 scale, 1:32 scale, and HO. 1:24 scale cars are the larges slot cars. In addition, they are typically which seven to eight inches long. These cars need a large that the size of the track required to race them make them impractical for home use.

Smaller 1:32 scale cars are more popular for home use. These cars are about five to six inches long. People often race this scal on commercial tracks in clubs and hobby shops. HO–sized slot cars have different scales ranging from 1:87 to 1:64. No matter the scale, HO cars all run on a track with the same width. The length of most HO slot cars is between 2.5 to 3.5 inches. 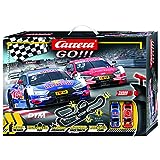