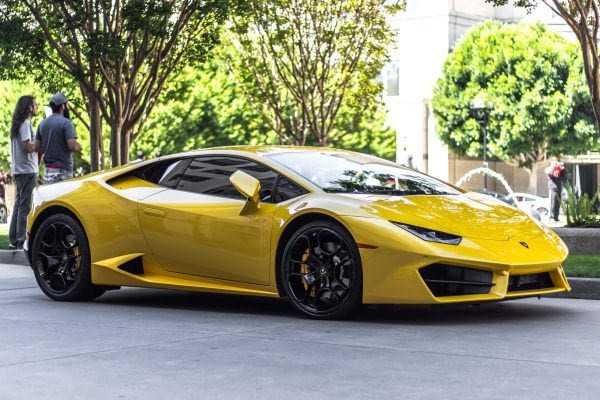 The Ferrari 458 has been labeled a “starter” Ferrari, but don’t let that fool you, because it’s certainly anything but a starter Ferrari. The Ferrari 458 has looks to die for and those looks are paired well with a mid-engine V8. Let’s dig deep into the Ferrari 458 and see if it has everything you need …

First things first, when we look at a car, we like to look and see how long it takes to reach 0-60. The Ferarri 458 is impressive to say the least. The top speed is 230 mph, if that tells you anything. Forget the 60 second rule with this car, because it is capable of reaching a speed of 124 MPH in only three seconds. Within seven seconds, it’s already at 186 mph.  How long does it take the Ferrari to go from 0 to 60? We’d say 2.85 seconds, which isn’t bad at all.

The Ferrari lineup is one of the fastest in the world, and we all know this. With a car like this, the car next to you is going to be a tiny speck in your rearview mirror in no time.

The Ferrari 458 has a dual-clutch box, which does a great job at changing gears. IN fact, there’s less shock and delay that if you were switching Tv channels. Take the upshifts as an example, that will take a mere 0.4 second. When approaching a corner, hold the left paddle, and those downshifts will automatically come.

With a Ferrari, the last thing you probably think about are the brakes, because we’re so focused on wanting to go. While there’s no denying the fact that this car is made for going, you do want something that can stop on the dime. The carbon-ceramic brakes are the standard stock on all 458s and are capable of parking your car on the dime.

As for the steering, it’s similar to a Honda. Slightly light as if the tires are barely even touching the ground. The ratio is 11.5:1, which is breathlessly swift. Directional control around a corner is so clear and on key that you will feel as if a rudder is tilling the asphalt under you. Going quick is easy, like doing square roots on a calculator.

The electronic magnetorheological shock absorbers are responsible for keeping the body of the car flat and calm, even when your heart is fluttering from the speed. Stability and traction control, the electronic differential, combined with a sport ABS mode are all adjustable directly on the steering wheels left handle.

On the Ferrari 458, the touchstones are all there – the sweet fishbowl engine hatch, everything, you name it. The transmission and launch-control buttons are there, and they look like three shotgun shells that have been embedded in the center console.

Despite it all, there are some changes that you should know about. The mid-engine car has been reshaped, with the cockpit bubble being pushed forward, looking a bit like an F-16’s canopy silhouette. As for the wheelbase, that is now  almost two inches larger, while the overhangs shrink. There are no longer any flaring nostrils.  They are gone and you will now find  a single mouth split.

Some other changes consist of the 4.5-liter engine. The engine is now speaking with a deeper voice than the one you used to know – the 4.3. It’s not so much a many bellow, but instead is less of a shriek. While the simplicity of the prior Ferrari dashboard is still there, the 458 has gone through some changes that the fingers will need time to get use to. The crowded steering wheel with all of its buttons for high-beams, blinkers, and wiper controls.

Knobs that page through a pair of display screens in the cluster. To the right of the tach, you’ll find the radio, and navigation. To the left, you’ll find the car status, which includes a “Vehicle Dynamic Assistance” screen. The brake, tire temperature engine/gearbox are predicted. Rather than sensors, you will find three colors that you will easily understand. Green is for “go,” Blue is for “warm-up,” and red basically means “game over.”

Long story short, if you’re looking for a car that is smart and fast, then the Ferrari 458 isn’t going to disappoint you. While it has gone through changes, it’s safe to say the changes were in the best interest of the driver.